A figure strode deliberately  down the hill toward us, the machete hanging from his belt to his shins swinging ominously back and forth.  We were deep into the Mountain Pine Ridge Reserve west of San Ignacio, Belize.  I handed Ken the hand-drawn map we had used to navigate to this private property on the river.  This was our inadequate indication that we were in fact permitted to be here.  The thing was, we were not sure that the caretaker of the property had gotten the message.  And from the way he marched towards us, it seemed that he hadn’t.  But what was that flanking his heels, bobbing and wobbling as fast as possible after the machete wearing man?  It looked like a tiny, floppy-eared brown and white puppy.

Thus was our first introduction to Senor Lopez and his fierce guard puppy, Spicy.

Over the next few days as we relaxed by the river, cleaning and maintaining the truck, rejuvenating ourselves with intermittent slides into the refreshing river, Senor Lopez kept a close eye on us, teaching us as much as he could about surviving in the bush of Belize all the while lamenting in his broken spanish/creole/english that the attention we were lavishing on his erstwhile guard puppy, Spicy, were surely ruining her for good.  “All Spicy do is eat, play, sleep!”  “An then people, they pet Spicy, and it is no good.”

Spicy learning how to do dishes

One of the most important lessons in my mind was how to kill giant tarantulas.  Kylee almost stumbled on one outside of the bathroom (apologies for the lack of pictures, I was too terrified to move), and soon we were all huddled slack-jawed around, at a very respectable distance of course.  Ken came running over not with the machete that one would imagine would be used to kill a spider the size of a dinner plate, but instead with a mere stick.  As Ken goaded the spider with the end of the killing stick it moved with lightening quick speed, latching onto the end with it’s fangs, causing all of us to scream, jump back and Ken to heroically pound it to a pulp.

Senor Lopez, firing up the bbq

By far the most impressive skill that Senor Lopez imparted was his complete mastery of the skill known as macheting.  Not only did he sharpen Joe’s machete to a razor sharp edge, he also bequeathed to Ken one of his worn-out, old machetes and taught them both how to swing one properly.  The grin spreading from ear to ear on Ken’s face might have prompted an unknowing individual to wonder if he had just won the $300 billion dollar PowerBall jackpot, nope just the euphoric grin of a man/boy with the best toy he could possibly imagine.  Needless to say, the jungle around our truck got destroyed, or rather tamed, that day.
One of the many sights we enjoyed in the Mountain Pine Ridge Reserve was the Hidden Valley Waterfall, at over 1,000 feet Central America’s tallest.  Although beautiful, it was not as awe-inspiring as we had hoped.

More fascinating was Pedro, the caretaker at the waterfall overlook.  A hunched over, weather beaten man, with his wisdom carved into his face, Pedro had been maintaining the overlook for 23 years. Leaving the waterfall we passed by a tall lookout tower that promised to offer stunning vistas of the surrounding landscape.  Unfortunately it was behind a barb wire fence clearly marked with a no trespassing sign.  Fortunately, we were still traveling with Joe and Kylee who had no reservations about driving to the main farmhouse and asking permission to climb the tower.  Gary, the owner of the Pine Mountain Farm, not only gave us permission to climb the tower, but also printed out a comprehensive map of Mountain Pine Ridge, and even offered us hot showers and internet. 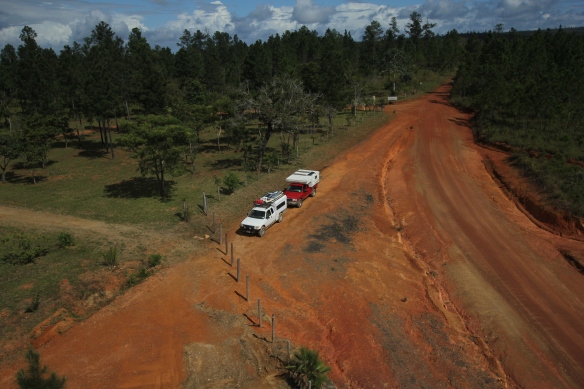 He clearly has either overlanded or traveled extensively and knows the high value those commodities hold.  We are still amazed every day we are on the road as we meet incredible people who are willing to share so much with us, and it inspires us to return that generosity as often as we can.

After a day of relaxing, reading, truck and camper cleaning and maintenance as well as a few rounds of competitive hearts, we hit the road for some jungle adventures.  First stop, Rio On Pools.  A beautiful series of pools cascading over granite rocks down the valley.

As refreshing as the water was, the tiny leeches clinging to our legs and slimy rocks threatening total body destruction with one misstep, prompted us to continue on to our next destination the Rio Frio Cave.  The Rio Frio Cave has the largest cave opening in Belize, its huge.

Inside a river carved through the middle of the cave and mineral deposits flowed like lava down the walls. 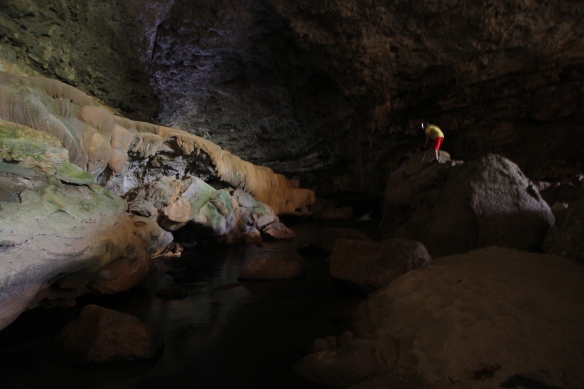 On the drive back to our campsite, we decided to take a “shortcut” described to us by Senor Lopez.

Lesson number 985 of overlanding was learned, do not take your rig aka home down “shortcuts” that are not on maps, especially when there are absolutely no signs of any previous traffic on them.

We reluctantly left the beautiful Pine Ridge to return to San Ignacio in preparation to cross into Guatemala.  We ate one final meal with patagoniaorbust, even finding the ingredients to make two belated Thanksgiving pumpkin pie, baked in a wood-fired oven.

After over a month of overloading adventures together we are parting ways this morning.  They are headed to Guatemala and we are holed up in San Ignacio, Belize waiting for my contact lenses to arrive (the gift that keeps on giving thanks to the Oaxacan thief) and catching up on blogging, podcast downloading, book reading, and hammock swinging.

The oven might have been a bit hot, but burnt crust and all it was delicious.

Donate towards our emergency beer, taco, gas or bail out fund!