The bottle looked innocent enough, merely herbs floating in a clear liquid.  Taking four shots in a row should be as easy.  Not easy when the four shots are part of the Guifiti Challenge at the Skid Row Bar. Guifiti is a local moonshine primarily made on the northern coast of Honduras.  It is not innocent.  It is potent.  Although recipes vary from town to town and even bar to bar, Guifiti is essentially aguardiente (local cheap booze) infused with a variety of herbs and spices.  It is rumored to have aphrodisiac and medicinal properties as well as a very high alcohol content.  During our two weeks on the Bay Island of Utila, we were able to closely study the effects of Guifiti on young European tourists, and although we cannot speak to the aphrodisiac effects, we can attest to its ability to enhance, impair, and otherwise debilitate and based on our observations recommend that no one in a normal state of mind should take four shots in a row.

Because we are older and wiser, we chose to only sample Guifiti once; our challenge while in Utila was to dive as much as possible.  Utila, Roatan, and Guanaja compose the Bay Islands about 50 km of the north coast of Honduras.

The second largest reef in the world coupled with some of the cheapest diving prices results in Utila, a budget traveler’s dream island.  Although food and hotel prices are higher then mainland Honduras, the affordable diving makes it a worthwhile stop.  Initially we had only intended on staying for a week while Ken completed his PADI Open-Water diving course.  We ended up staying for almost two weeks as we both completed our PADI Advanced Open-Water course.  We can now dive anywhere in the world to depths of 30 meters/100 feet.

During our Advanced course we dove our first ship wreck.  Dubbed the Halliburton Wreck by the dive companies who had paid for it to be scuttled onto a sand patch, it was incredible to glide along the open deck and through the wheelhouse observing the plethora of marine life that now called the wreck home.  We also were required to do a certifying night dive.  I was frankly terrified of the thought of the complete blackness I knew would be the ocean at night, only pierced by our small torches, unknown sea creatures surrounding us.  My fears were confirmed, but the coral that came to life at night blooming with vibrant color and the bioluminescence flashing in the corner of my vision turned the dive into a surreal experience.  It felt as if we were floating through space surrounded by stars.  For our final two “fun” dives we were taken to the west side of Utila and dove its famous Black Coral Wall.  Here the reef stretches out from the shore to plunge 130 feet to the ocean floor.  Swimming along the wall was beautiful black, purple, green, and blue coral with hundreds of large and small brightly colored fish interspersed among them. 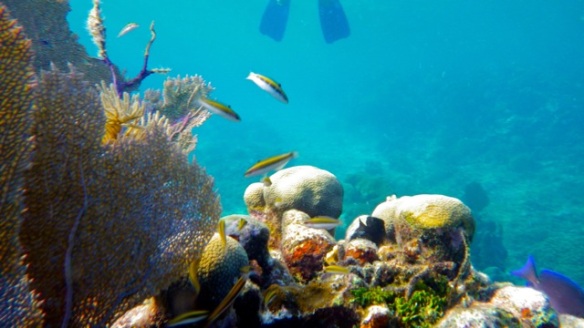 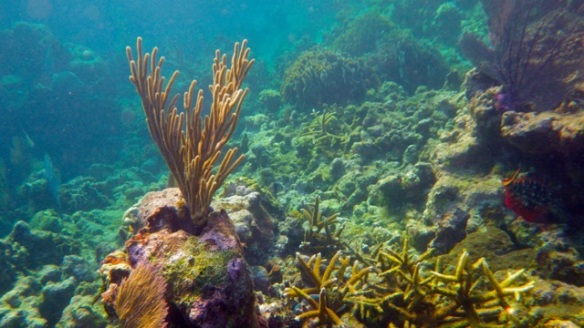 After two weeks, our challenge had been completed and we are now seriously hooked on diving and Utila.  For any future travelers headed to Utila, we recommend diving with Parrots Dive Center.

This is a locally owned and operated dive center with top-caliber instructors and dive masters, decent equipment, and an amazing dock bar from where we watched two weeks worth of gorgeous Caribbean sunsets.  It is hard to tear ourselves away, but the road is calling and our CA-4 will expire in a month and we still have Nicaragua to discover!

Honduras smells like sweet, sugary smoke.  Miles upon miles of banana plantations and sugar cane fields stretch across the eastern Caribbean coast rimmed by mountains densely carpeted with jungle.  Honduras is green.  A haze blankets the fields and mountains: a haze of humidity and smoke.  The straight road in front of us coupled with the startling green tempered at the edges mesmerizes me, until  ‘BANG’ the front end of the truck slams into a car-sized pothole.  Honduras is potholes.

Before we left while we were ‘planning’ of our route, Honduras was the one country that we had planned on avoiding.  With two cities ranking in the top ten most dangerous in the world as well as instability related to a military coup in 2009, we figured in the name of safety and preserving the sanity of our mothers’ we would take the normal overland route and drive the narrowest part of Honduras on the Pacific coast in one day.   But, our plans are never set in stone and we rarely know where we are going more then a few days in advance, and we were lured into Honduras with reports of two stellar breweries and cheap diving in the Bay Islands.

First up was the small town of Copan Ruinas just over the border.  Most tourists visit Copan Ruinas in order to explore the Mayan ruins of Copan, we went for the authentic German beer and food served at Sol de Copan.  Thomas, the owner and brewmaster, has operated and owned this restaurant for over 8 years.  He brews with fresh spring water using ingredients he imports from Germany, where has justly won awards for his beer.  It was incredible to sit down to some very delicious beers and  German food, it had been too long since I had spatzle (sorry no pictures, we were too busy stuffing our faces)! 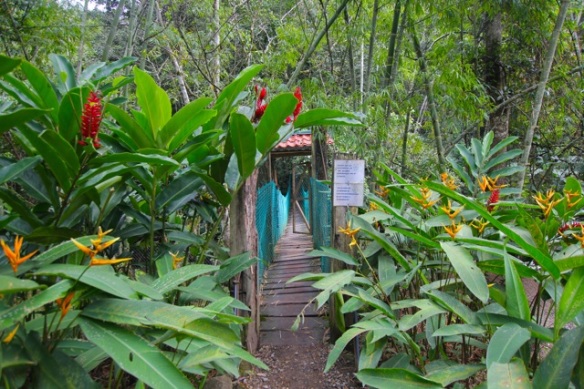 We continued our hotsprings tour and drove the 20 km dirt road to the Luna Jaguar Hot Springs.  Set in amongst the jungle as a series of 10 pools of varying temperatures.  Our favorite was the spiritual bath that cascaded from hot to cool with a stately ‘Mayan’ sculpture overseeing our soaking.

Up next was D&D Brewery near Lago Yojoa.  We had been hearing about this place since we started researching the trip.  It seems as if it as the new ‘place to be’ on the overlanding circuit of Honduras.  We were not disappointed and enjoyed a few days of paddleboarding on the lake, pitchers of beer and good company. 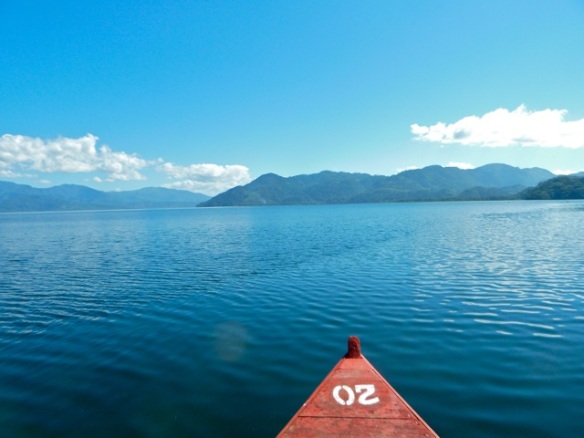 After a month and half in Guatemala, we were yearning for some beach time so we pointed Suzie towards the Caribbean and the town of Trujillo.  Trujillo is near the place where Christopher Columbus first set foot on the the American mainland in 1502 and one of the earliest Spanish settlements in Central America.  It was also the first place where we got a taste of the poverty makes Honduras one of the poorer Latin American countries.  Barefoot children in filthy, dirty clothes ran down the side of the road trying to see us bags of coconut water.  Homes built of concrete, mud, and tin almost crumbling where they stood lined the road.  No shiny chicken busses in Honduras.  Only decrepit hand-me-down yellow school busses packed with people.  In many places, more bikes then cars rode down the road.  Ken is slalom driving, dodging kids, busses, bikes, and potholes.  Honduran highways have more potholes then any other road we have driven thus far.  And I’m not talking your normal run of the mill American pothole, I’m talking truck swallowing, axle breaking, tire popping monstrosities.  Intact we rolled into Trujillo into our own slice of Caribbean deserted beach paradise and settled in to do some serious relaxing.

Donate towards our emergency beer, taco, gas or bail out fund!